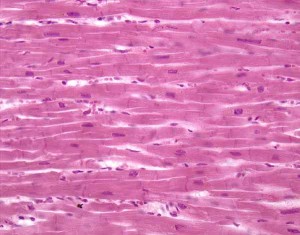 Results
Patient demographics, catheter insertion site, and catheter tip location for each of the three groups are summarized in Table 1. The characteristics of each group were similar except for the relative proportion of men vs women in each group. Physiologic variables for each of the three groups during the course of the study are shown in Table 2. There were no significant differences among the groups for any of the variables recorded, Table 3 shows the mean, SD, and range of in vitro Sv02 and hemoglobin for each patient in each group. The group values for Sv02 are also shown in this table.
The scatter plots of in vivo vs in vitro SvOa for each measurement time in all patients are shown in Figure 1. Figure 1a shows the difference (in vivo —in vitro) in Sv02 vs the in vitro Sv02 as a criterion standard. Figure 1b shows the difference (in vivo —in vitro) in
Sv02 vs the mean Sv02 ([in vivo + in vitm]/2) in recognition that the in vitro Sv02, as determined by CO-oximetry, is not free of measurement error. The “accuracy” of the IL-282 CO-oximeter, as reported by the manufacturer, is ± 1 percent (saturation). Although previous studies have all assumed that the in vitro Sv02 value obtained by bench oximetry represents a true criterion standard for comparison, no independent assessment of the “accuracy” of CO-oximetry exists (see appendix). 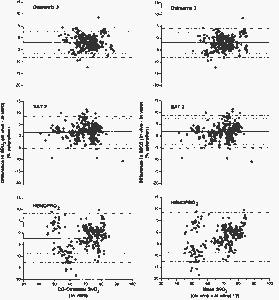