A Useful Parameter for Distinguishing between Pleural Exudates and Transudates (4)

Statistical Analysis
Nonnormal distributions were identified from their skew and kurtosis. The statistical significance of differences between means was estimated by Students t test if the variables were normally distributed and by Wilcoxon’s t test otherwise. Correlations were estimated using Pearsons correlation coefficient after normalization of nonnormal variables.
The usefulness of each of the biochemical parameters for identifying exudates was evaluated by Bayesian methods in terms of sensitivity (TP/[TP + FN]), specificity (TN/[TN + FP]), positive predictive value (PPV) (TP/[TP + FP|), negative predictive value (NPV) (TN/[TN + FN|), and efficiency ([TP + TN )/|TP + TN + FP + FNj), where TP is the number of true positive diagnoses, TN the number of true negative diagnoses, FP the number oi lalse positive diagnoses, and FN the number of false negative diagnoses made using criteria based on the parameter being tested.

Results
Table 2 lists the means, standard deviations, and ranges of P/SPROT, PLDH, P/SLDH, PCHOL (see also Fig 1), and P/SCHOL for each group of patients. For each parameter, the differences between its mean value for the transudate group and its mean values for the three exudate groups were statistically significant (p<0.001).

Table 2—Mean Values (x), SDs, and Ranges of the Parameters Studied in the Different Types of Effusions (n = number of cases) 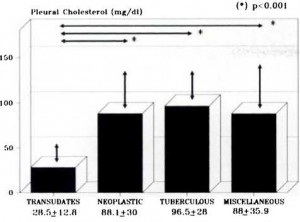