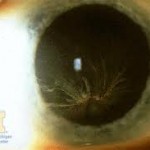 A 62-year-old man with known hypertension, hypercholesterolemia, peripheral vascular disease, ischemic heart disease, ventricular arrhythmias and chronic obstructive pulmonary disease presented with a nine-month history of progressive dyspnea, lower extremity dysesthesias and weakness. Further inquiry revealed a history of a productive cough, fatigue and an 80 pack-year smoking history. He complained of decreased visual acuity, weakness and distal paresthesias.He had severe postprandial nausea and intractable vomiting, and had lost approximately 18 kg. There was no history of bowel or bladder dysfunction. He had a history of significant alcohol consumption. His medications consisted of isosor-bide dinitrate 30 mg once daily, enteric coated ASA 325 mg once daily, pentoxifylline 400 mg bid, metoprolol succinate 50 mg bid, amiodarone 400 mg bid and diltiazem continuous delivery 120 mg once daily. At the time of admission he was experiencing low grade fevers, night sweats and dyspnea at rest, and was confined to a wheelchair because of weakness and ataxia. He was complaining of severe pain in his lower extremities, which was incompletely controlled with narcotics.