An Evaluation of the Accuracy of Assess and MiniWright Peak Flowmeters: Methods (3)

Each meter was first tested as new and then distributed to either patients or normal subjects. All were instructed to use the peak flowmeter 200 times. The meters were then reevaluated as described above and their accuracy was compared with that obtained when new.
Four MiniWright peak flowmeters were obtained from our outpatient clinks. Each of these meters had been used extensively by many different patients over the preceding one to two years.
Calculations
The filtered peak flow data were displayed on a spreadsheet (Lotus 123) for analysis. The data were graphed and inspected for evidence of spurious data (ie, “noise spikes”) created by electrical transients. An example is shown in Figure 2, which plots pneumotachometer flow vs time for 0.4 s. The actual peak flow was determined to be the maximum flow value (as measured by the pneumotachometer) and compared with the peak flow obtained from the meter being tested. The percentage of error in peak flowmeter measurements was expressed as 100 percent times the absolute value of (meter-actual)/actual peak flow readings. 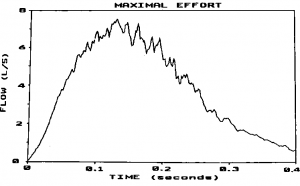