An Evaluation of the Accuracy of Assess and MiniWright Peak Flowmeters: Results (1)

The old Healthscan meters were found to be extremely unreliable and were consistently nonfunctional. This problem was also noticed by our patients who quickly returned the meters believing that they were inaccurate. As they have been out of production for more than ten years, we will not present farther data on these meters.
One each of both the Assess and the MiniWright meters were nonfunctional. Both were replaced. A second Assess peak flowmeter became nonfunctional after approximately 30 uses. This was replaced with a meter previously given to another patient. With both nonfunctioning Assess meters, the spring had become disconnected from the butterfly. This problem was brought to the attention of Healthscan, who stated that a newer design had corrected the weak attachment (personal communication). Figure 3 shows the data collected for the Assess peak flowmeter and for the MiniWright meter when new. The Assess meter generally underestimated peak flow at values less than 350 L/min and generally overestimated peak flow at values greater than 350 U The MiniWright meter consistently overesti mated flow rates below 400 L/min but was reasonably accurate at peak flows above that range. 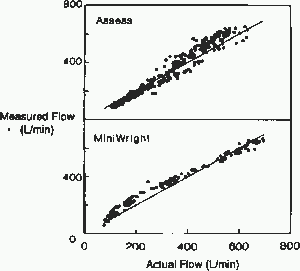