An Evaluation of the Accuracy of Assess and MiniWright Peak Flowmeters: Results (2)

Figure 4 shows the data collected after 200 uses of each peak flowmeter. Figure 5 shows the data from the four MiniWright peak flowmeters used in our outpatient clinics over the last one or two years. There was a dramatic reduction in the accuracy of the MiniWright peak flowmeters with progressive overestimation of peak flow. Table 1 summarizes the data comparing average percentage of errors of the two peak flowmeters at varying flow rates, both when new and after 200 uses.
Figure 6 shows data regression lines from the above data and compares the new vs used Assess and MiniWright meters. Data from all efforts for each type of meter were correlated using linear and nonlinear regression models. We found that the data for Assess meters was best described as a linear function of the actual peak flow in both the new and used meters. The graph also demonstrates the accuracy of the meter, especially in the important range below 300 U min. There is no significant change in accuracy after the 200 uses. In contrast, the peak flows measured by the MiniWright are better described as a function of the square root of actual flow. In the important range below 300 L/min, the new meters mildly overestimate flow, and with use, the accuracy of the readings diminishes further. 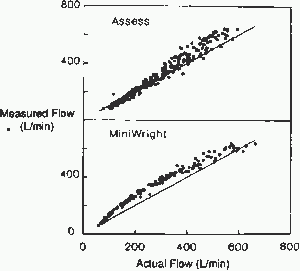 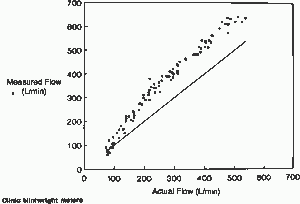 Figure 5. Peak expiratory flow rates determined on extensively used (from outpatient clinic) MiniWright meter as compared with a calibrated pneumotachometer. The solid line is the line of identity. 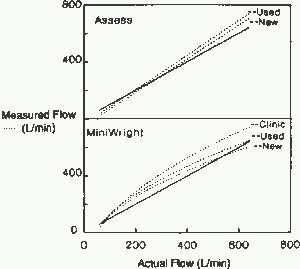