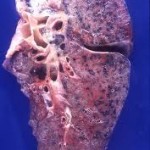 The patient, a 68-year-old exsmoker, underwent thymectomy in May 1995 for myasthenia gravis. During surgery, the thymoma was found to be malignant. After surgery, he received radiation to his mediastinal area at 200 cGy/day for 20 days. The patient was maintained on azathioprine 100 mg/day and prednisone 30 mg/day throughout his radiation treatment, and pyridostigmine 60 mg three times/day for myasthenia gravis. He did not receive chemotherapy. There was no exposure to inhaled allergens or toxins, history of systemic disease, preceding upper respiratory infection or other neoplastic disease.

Six weeks after the completion of radiation therapy, the patient developed progressive dyspnea on exertion and a dry cough. He had no sputum production, hemoptysis fever or chills. The respiratory symptoms developed as the dose of prednisone was gradually reduced at a rate of 5 mg/day/month to 20 mg/day. Chest x-ray showed no evidence of parenchymal disease. Treatment with trimethoprim/sulfamethoxazole and cough suppressant was initiated with no clinical improvement. The patient was admitted to hospital five days later with worsening dyspnea and cough. On admission pulse rate was 84 beats/min, blood pressure was 130/80 mmHg, respiratory rate was 16 breaths/min, and the patient was afebrile. Bibasilar inspiratory crackles were noted, and breath sound was good bilaterally. There was no evidence of clubbing or lymphadenopathy. Cardiovascular and abdominal examinations were both unremarkable.