Chest x-ray on admission showed coarse streaky opacities radiating out from the right hilum (Figure 1, left), with interval development of moderate left perihilar and mid lung opacities, in part airspace and in part reticular. Computed tomography (CT) of the thorax showed diffuse patchy ground glass opacities bilaterally, most prominent in the middle to upper lung zones, with mild airways dilation in these regions (Figure 2). On the right side, there was a well-defined sharp lateral margin to the opacities that coincided with the radiation port zone and was not explained by any anatomical boundary, compatible with radiation-induced acute lung injury. The margin on the left was ill-defined and tended to follow airways towards the periphery of the lungs. Appearance of the left lung was compatible with BOOP. There was a small right-sided pleural effusion and minimal left pleural reaction. There was no mediastinal lymph node.

At bronchoscopy, both the proximal and distal airways were normal, and there was no pus. Bronchoalveolar lavage (BAL) was obtained from the lingula in the standard fashion with five 20 mL aliquots of normal saline. A careful search for pathogens in the BAL was negative; in particular, acid fast bacilli stain, fungal and methenamine silver stain, and direct fluorescent antibody stain for cytomegalovirus were negative, and there were no viral cytopathic changes. Final cultures were all negative. Differential cell count from the BAL showed 40% macrophages, 4% neutrophils and 56% lymphocytes; lymphocyte subtyping was not done. 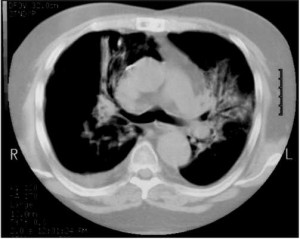 Figure 2) Computed tomography of the thorax showing diffuse patchy ground glass opacities with mild airway dilation. A well-defined lateral margin is seen on the right. The infiltrates tend to follow the airways and extend to the periphery ofthe lung on the left