Corticosteroids and azathioprine do not prevent radiation-induced lung injury: DISCUSSION (2) 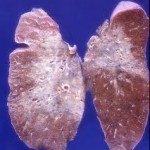 By contrast, BOOP is a very uncommon finding after radiation exposure. Two previous cases have been reported in the literature; both were limited to the irradiated area. One occurred two months after and the other 13 years after completion of irradiation. Recently five more cases of migrating BOOP two to seven months postradiotherapy for breast carcinoma have been reported . In all five cases of BOOP, there was bilateral lung disease despite a unilateral lung field irradiation, and in one of the cases, BAL demonstrated classical CD8 lymphocytosis of BOOP .

Our patient presented with clinical, imaging and BAL findings consistent with BOOP on the nonirradiated side of the chest. Although we do not have the subset differential counts of the BAL cells or tissue biopsy, the CT scan findings are more compatible with BOOP than with hypersensitivity pneumonitis. We believe radiation was a cause of BOOP in this case for three reasons. First the temporal relationship fit with the usual reported delay in the onset of a radiation-triggered alveolitis after the period of irradiation. Second, there was simultaneous evidence of classic radiation pneumonitis within the irradiated field of the chest. Third, no other cause of BOOP was identified.

Our patient is unique because of the simultaneous presence of both classic radiation pneumonitis within the irradiated field and the development of BOOP on the nonirradiated side. Of note is that the five recent cases of radiation-related BOOP occurred in patients with breast carcinoma; our patient demonstrates that this may happen in patients with malignant thymoma as well, indicating that the type of preceding malignancy probably plays no role in the pathogenesis of radiation-induced BOOP.