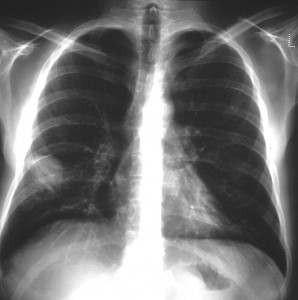 The PFTs performed ten days after therapy showed markedly increased residual volumes and severe reduction in diffusing capacity compared to studies before BMT (Fig 1). The patient recovered from the acute episode of CMV pneumonia. Repeat BAL at two weeks after therapy was negative for CMV, indicating cessation of viral replication and shedding; however, persistent lymphocytosis (62 percent) was found in the BAL fluid. Repeat PFTs one month after the infection showed marked improvement (Fig 1). The patient was discharged from the hospital on therapy with cyclosporin-A and prednisone. Cyclosporin-A was subsequently discontinued because of tremor, and prednisone was gradually tapered to 20 mg/ day on alternate days.
Six months after the BMT, the patient presented with generalized malaise, a dry cough, and dyspnea. A chest x-ray film showed bilateral infiltrates (Fig 2). The PFTs showed marked reduction in all lung volumes and severe reduction in diffusing capacity (Fig 1). The BAL fluid was negative for CMV and other pathogens, but persistent lymphocytosis was again noted (Table 1). Open lung biopsy showed plugs of granulation tissue in the bronchioles and alveolar ducts, with variable degrees of interstitial infiltration by mononuclear cells (Fig 3), which is consistent with BOOPfi The patient was treated with intravenous methylprednisolone at 500 mg twice per day, which resulted in a rapid recovery. Repeat PFTs showed significant improvement in all lung volumes and diffusing capacity (Fig 1). 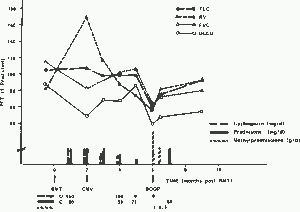 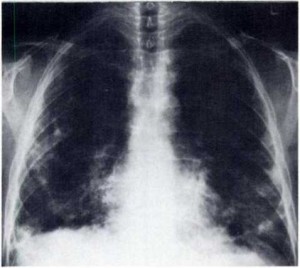 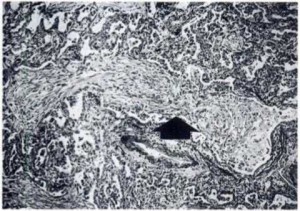