Effects of PEEP on Respiratory Mechanics after Open Heart Surgery (10) 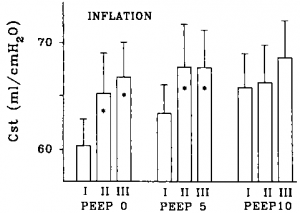 Figure 4. Average values of static compliance of the respiratory system (Cst,rs) during stepwise inflation runs I, II, and III at three levels of PEEP in ten patients, Bars=l SE. Asterisk = p<0.05 versus run 1.