Effects of PEEP on Respiratory Mechanics after Open Heart Surgery (8)

Figure 2 illustrates the relationship between changes in lung volume (AV) and Pst,rs obtained at end-inspiration and end-expiration in a representative patient at different levels of PEEP during the first stepwise inflation (A) and deflation (B) run with PEEP. Changes in volume are expressed relative to the initial EELV at ZEEP Up to PEEP of 6 cm H20, the data points moved essentially along a fixed line, ie, along a fixed static volume-pressure (V-P) curve, indicating that recruitment of lung units (if any) was negligible (Fig 2, A). At higher values of PEEP, the data points were displaced progressively upward, suggesting that there was progressive recruitment of previously atelectatic lung units.

We quantified the “recruited” volume (Vrec) with PEEP as the difference in lung volume between the V-P curves at PEEP and ZEEP at fixed Pst,rs, as described by Ranieri et al. We chose Pst,rs of 15 cm H20 (broken lines in Fig 2) because this allowed us to obtain Vrec in all patients at all levels of PEEP With increasing PEEP in this patient, there was no appreciable Vrec at PEEP up to 6 cm H20 because the corresponding data points fell along the ZEEP line. During PEEP decrease (Fig 2, B) the V-P lines moved downward (derecruitment), but at ZEEP did not return to the initial position, reflecting the increase of EELV after run 1 (Fig 1). 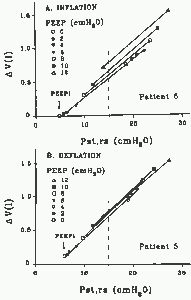 Figure 2. Relationship between changes in lung volume (AV) and static elastic recoil pressure of the respiratory system (Pst,rs), obtained at end-inspiration and end-expiration in a representative patient at different levels of PEEP during the first stepwise inflation (A) and deflation (B) with PEEP. Changes in volume are expressed relative to initial end-expiratory lung volume at zero end-expiratory pressure (ZEEP). Lines are drawn between end-expiratory and end-inspiratory points obtained at different levels of PEEP. Up to PEEP of 6 cm HjO, data points fell along a fixed line. Slope of the lines represents static compliance of the respiratory system. PEEPi = intrinsic PEEP. Recruited alveolar volume with PEEP was measured as difference in volume between lowermost line which pertains to ZEEP and lines obtained with PEEP at Pst,rs 15 cm H20 (broken Unes). For further explanations, see text.