Effects of PEEP on Respiratory Mechanics after Open Heart Surgery (9)

Similar to the preceding inflation, the data points obtained at PEEP levels between 6 and 0 cm H20 fell along a single V-P line. In Figure 2, the upward shift of the static V-P-relationships with increasing PEEP (panel A) may be interpreted as recruitment of previously collapsed lung units, while the downward shift with decreasing PEEP (panel B) should reflect derecruitment. It should be noted, however, that our measurements of Vrec may reflect in part overdistension of previously open alveoli, resulting from surface tension phenomena and tissue hysteresis. Thus, Vrec should be taken as an upper estimate of recruitment of previously collapsed alveoli.
Figure 3 illustrates the average values of Vrec and AEELV obtained during the three consecutive inflation runs in the ten patients at PEEP of 5 and 10 cm ILO, and at PEEP of 15 in three patients which were obtained using the procedure depicted in Figure 2. In this instance, both Vrec and AEELV pertain to the changes observed during each individual run and not to the cumulative changes observed during the three runs. At PEEP of 5 cm ILO, there was no significant difference in the values of AEELV or Vrec obtained in the three runs, though the values of Vrec tended to be higher in the first run. 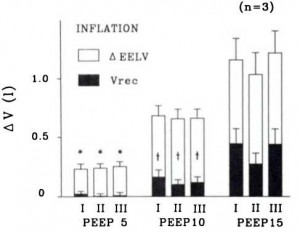 Figure 3. Average values of recruited alveolar volume (Vrec) and changes in end-expiratory lung volume (AEELV) during stepwise inflation runs 1, 2, and 3 at PEEP of 5 and 10 cm ILO in ten patients, and at PEEP of 15 cm ILO in three patients. Bars= 1 SE. Asterisk — p<().(X)l for AEELV at the first PEEP level where AEELV was significantly different from ZEEP; dagger = p<0.001 for Vrec at tin* first PEEP level when* Vrec was significantly different from ZEEP