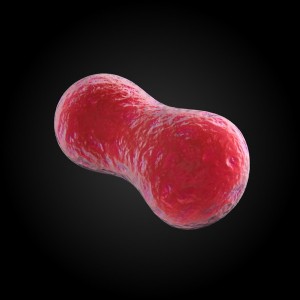 Fibrin is found in the pulmonary interstitium and alveolar spaces in acute and chronic inflammatory forms of lung diseases, and may be an important mediator of inflammation during the active and resolving phases of these diseases. Fibrin and its degradation products may promote and propagate inflammation by increasing vascular permeability, producing endothelial cell retraction, and promoting inflammatory cell chemotaxis. Fibrin in the extravascular spaces of the lung may also provide a “provisional matrix” in which inflammatory cells and fibroblasts adhere, migrate, and initiate later stages of tissue repair that can lead to pulmonary fibrosis.
Fibrin deposition in the lung is controlled by several factors, the most important of which is likely the changes in alveolar-capillary membrane permeability that regulate the influx of plasma fibrinogen into the extravascular spaces of the lung. Marked alterations of procoagulant and fibrinolytic activities at sites of inflammation within the pulmonary compartment may regulate the rate at which fibrin is formed and degraded. Profound increases in procoagulant activity accompanied by decreases in fibrinolytic activity have been found in the BAL fluids of patients with adult respiratory distress syndrome and chronic interstitial lung disease (ILD), such as idiopathic pulmonary fibrosis and sarcoidosis.
The purpose of this study was to determine whether or not fibrin degradation in the lung is related to lung inflammation and to examine the relationship between coagulation abnormalities in the lung and coagulation abnormalities in the blood. We measured fibrinogen degradation products (FDP) with the D dimer configuration simultaneously in the bronchoalveolar lavage (BAL) fluids and plasma of patients with pulmonary sarcoidosis and healthy subjects and compared D dimer levels with BAL cellularity and total protein measurements. The D dimer is a plasmin digest of stable fibrin only and its presence indicates that the cascade of coagulation events leading first to fibrin polymer cross-linking and then to fibrin degradation has occurred. Since fibrin may regulate inflammatory processes in lung disease, we hypothesized that assessment of fibrin and its degradation products in the extravascular spaces of the lung may be a useful indicator of disease activity. Moreover, if damage to the alveolar-capillary membrane allows exchange of large proteins between the circulation and pulmonary extravascular spaces, then evidence of fibrin turnover in the lungs may be detected in the blood.