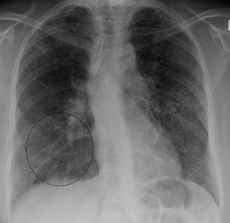 Altered coagulation and fibrinolysis have been found in the lungs of patients with ILD and adult respiratory distress syndrome and in the blood of patients with diseases and injuries that can involve the lung. None of these studies, however, examined the relationship between lung and blood coagulation abnormalities concurrently. In the present study, BAL D dimer was found in the majority of patients with sarcoidosis, but there was no correlation with plasma D dimer levels. While BAL D dimer may be marker of pulmonary disease activity, plasma D dimer may be a marker of systemic disease activity that frequently accompanies sarcoidosis and other types of ILD. Our study did not examine any association between circulating D dimer and systemic disease activity; however, activation of the blood coagulation system has been demonstrated in a variety of systemic disorders and has been shown to be a sensitive and temporally related measure of disease activity.- Blood fibrino-peptide A levels have been found to correlate with disease activity in systemic lupus erythematosus and Crohn’s disease. Circulating fibrin split products may indicate an increased risk of developing adult respiratory distress syndrome and may serve as a marker of persistent respiratory distress in this condition.
In conclusion, we found activation of the coagulation system as determined by the generation of the FDP D dimer in the lungs and blood of subjects with sarcoidosis. The finding of D dimer in the BAL fluid of our patients was evidence that fibrin deposition and degradation had occurred locally in the lung. The finding of D dimer in BAL fluid correlated with the lymphocytic alveolitis seen in sarcoidosis, suggesting that this FDP may be one indicator of disease activity in the lung. Plasma D dimer may indicate systemic disease activity with or without pulmonary involvement. Since fibrin deposition in the lung may have a role in mediating inflammation in ILD and possibly contributes to healing by fibrosis, measurement of markers of fibrin turnover such as D dimer may have a role in the clinical management of ILD.