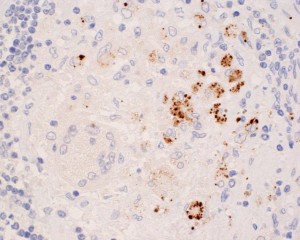 Autoradiography using the method of Connaghan et al was performed on BAL fluids from healthy subjects and patients with sarcoidosis as evidence that the EIA used in this study was detecting FDP containing D dimer. Autoradiography also gave a qualitative assessment of fibrinogen and the range of FDP in BAL fluids. Soluble fibrin (Desafib-X, Biopool, Umea, Sweden), D dimer (American Diagnostica, New York), and human plasma as a source of fibrinogen were used as references. Cels were cast from a 2 percent agarose suspension in 0.1 sodium dodecyl sulfate 0.05 M phosphate buffer, pH 7.00. The reference and BAL samples were boiled for 5 min in 0.1 percent sodium dodecyl sulfate and mixed with methylene blue marker dye. They were applied to a gel at a final concentration of 3 mg of protein per milliliter and electropho-resced on the cooled cell (10°C) of an LKB 2117 Multiphor apparatus for 60 min. The gels were fixed, incubated with l“I-labeled goat anti-human fibrinogen antibody (Organon Teknica Corp, West Chester, Pa), washed, and exposed to Kodak X-omat AR film.
Analysis of Data
Mean values are presented ± 1 SD. Comparison between two means of interval data was made using the unpaired Students t test with the level of significance at p^0.05. The x analysis with Yates correction factor for 1 degree of freedom and small samples was used to assess differences in terms of detectable and undetectable levels of D dimer between healthy subjects and patients. Linear regression was used to assess the association between two variables and the Pearson product-moment correlation coefficient (r), the strength of association between the variables.