The individuals with BAL D dimer were characterized by types 2 and 3 chest radiographs and a mean percent of predicted forced vital capacity (FVC) of 71 ± 13. The two sarcoidosis patients without BAL D dimer had type 1 and type 2 chest radiographs and a percent predicted FVC of 117 and 104, respectively. In comparison, the mean percent predicted FVC for the healthy subjects was 101 ± 14 which was significantly higher than for the sarcoidosis patients with BAL D dimer (p<0.001).
Autoradiography revealed no fibrinogen or FDP in the concentrated BAL fluids from three healthy individuals, but showed a variety of bands in the BAL fluids of all six sarcoidosis samples tested (Fig 2). The heaviest label migrated closely with soluble fibrin (270,000 MW) and fibrinogen (MW340,000). Fainter bands migrating more slowly represent higher molecular weight fibrin degradation fragments (YY and larger). Lower molecular weight FDP are seen in the region of D dimer (MW 190,000). Fibrinogen fragments X, Y, and D also migrate in this region (especially fragment Y, MW 150,000) and cannot be distinguished from D dimer by the autoradiographic method used. 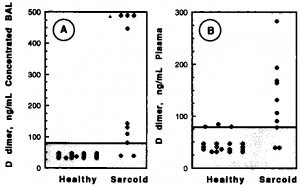 Figure 1. Distribution of BAL D dimer (panel A) and plasma D dimer (panel B) in healthy individuals and patients with sarcoidosis. The D dimer was measured by EIA in BAL fluids concentrated 100 times and in plasma. Data points below 78 ng/ml (shaded region) represent samples in which D dimer was not detectable by the assay used. Data points by the asterisk in panel A represent D dimer levels of610, 984, and 2,540 ng/ml. The x* analysis comparing detectable and undetectable levels of D dimer between healthy and sarcoidosis subjects showed highly significant differences (p<0.005) in both BAL and plasma. 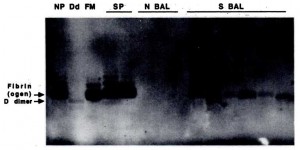