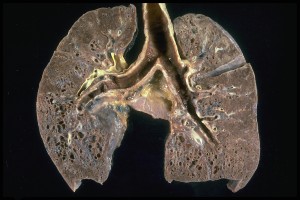 It is not surprising that fibrinogen or FDP were not found in the BAL fluids of healthy individuals. Fibrinogen (MW 340,000) is not among the proteins found by BAL in normal lungs. Therefore, no fibrin formation, cross-linking, or degradation should occur in the intact normal lung, though normal lung tissue and alveolar lining fluid contain other procoagulant and fibrinolytic factors including tissue factor and plasminogen. Permeability of the alveolar-capillary membrane is probably the most important factor that regulates the influx of fibrinogen into the extravascular spaces of the lung. Alveolar-capillary permeability is increased in acute and chronic pulmonary inflammation, allowing even the largest plasma proteins to enter the alveolar space. Fibrinogen leaks from the plasma into the pulmonary interstitium and alveolar spaces of patients with sarcoidosis and other ILD where fibrin turnover ensues forming various FDP. Enhanced procoagulant activity and inhibited plasminogen activator activity likely shift the balance of fibrin turnover in ILD toward fibrin formation. This may create a constant fibrin “burden” from which D dimer and other FDP can be generated continuously during active inflammation. Once the inflammation resolves, the balance of fibrin turnover may return to a profibrinolytic state, clearing deposited fibrin and FDP
Bronchoalveolar lavage D dimer in sarcoidosis patients tended to be accompanied by high BAL total protein level, cells per milliliter of BAL fluid, and higher percentage of lymphocytes, factors that may be associated with greater disease activity in sarcoidosis. The T lymphocytes that produce vasoactive mediators directly or by stimulating mast cells could be part of the lymphocyte population in the patients with BAL D dimer. The T lymphocytes with this capability could initiate or propagate, or both, increased alveolar-capillary membrane permeability, allowing fibrinogen into extravascular spaces of the lung where vasoactive peptides cleaved from fibrinogen could amplify and perpetuate increased alveolar permeability. Activated macrophages also could be involved in tissue injury and enhanced alveolar-capillary permeability in a variety of ways, including release of oxygen radicals and the elaboration of cytokines, such as tumor necrosis factor.