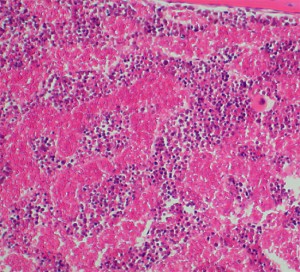 By contrast, hyperglycemia was greater after hypothermic CPB at closure of the chest and postoperatively. Hypothermia inhibits hepatic glucose production during CPB so that a greater glycogen reserve can be subsequently transformed into glucose after CPB. The residual moderate postoperative hypothermia may also limit glucose utilization although more shivering episodes were observed in this group.
A low plasma insulin concentration has been shown previously during hypothermic CPB, although Mescheryakov et al found an increase in plasma insulin. Our data agree with the former authors’ findings. Experimentally an exposure to cold inhibits insulin secretion. Catecholamines substantially inhibit insulin release through alpha-adrenergic stimulation. However, in the present study, this explanation is unlikely, since plasma catecholamines and insulin levels were both higher during normothermic CPB than during hyperthermic CPB. Yokota et al suggested that the suppression of insulin secretion during CPB resulted from a direct inhibitory action of heparin; since in the present study insulin levels decreased selectively during hypothermic but not normothermic CPB, this role of heparin is unlikely.