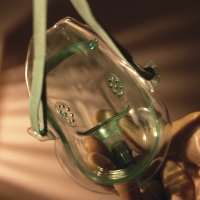 At each 4-month visit, participants were interviewed about their smoking status and inhaler adherence. The inhaler canisters were collected and weighed, and four replacement canisters were issued. Self-report and canister weighing, discussed later on, were the two measures of inhaler compliance at all sites of this ten-center study.
The prescribed medication protocol consisted of two inhalations, three times per day, of the assigned MDI (either ipratropium bromide or placebo) every day for the duration of the the trial. Canisters were initially dispensed to the participants at the second session of the group smoking cessation program. A health educator provided detailed instructions on proper use of the MDI and observed and corrected the inhaler technique of each participant individually. Strategies for linking inhaler use to daily activities, such as tooth brushing or meal schedules, were discussed in an effort to insure maximum adherence. Inhaler technique was rechecked on at least two occasions during the initial 12 sessions and at each follow-up visit.
Nebulizer Chronolog Study
An ancillary study was undertaken to assess adherence to prescribed inhaler use in greater detail utilizing an electronic medication monitor, the Nebulizer Chronolog (NC). This ancillary study was conducted in a sample of the study population at two of the ten participating centers, the University of California at Los Angeles and Johns Hopkins University. The NC (Forefront Engineering Corp, Denver, Colo) is a microprocessor device that accepts an MDI mouthpiece and canister and records the date and time of each inhaler actuation by activation of a microswitch.