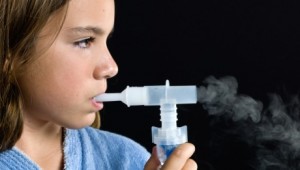 Feedback Condition: At the time they initially received their inhalers, participants in the feedback group were instructed in the ability of the NC to record the time and date of each actuation. Participants received printed copies of their NC record of inhaler use at the end of weeks 1 and 7 of the 12-week smoking cessation program. At these feedback sessions, the health educator and participant jointly reviewed the pattern of inhaler use during the previous period for appropriateness and adherence to prescribed use. Praise was given for the areas in which usage was satisfactory, and individual behavioral strategies, such as “anchoring” inhaler use to daily routines (eg, before tooth brushing in the morning or evening), were collaboratively developed to address problem areas. These brief (5-min) feedback sessions continued at each 4-month follow-up visit.
Measures of Adherence
Self-Reporting: Self-reported inhaler adherence was ascertained at the 4-month follow-up by participant responses to the question, “How frequently, on the average, are you using your inhaler at present?” The seven response options ranged from “not at all” to “four or more times per day.”
Canister Weight: Canister weight compliance was determined by weighing each of the four numerically coded inhaler canisters on a digital electronic balance (Sartorius; model 1002; Westbury, NY) to the nearest tenth of a gram before being dispensed and by reweighing the canisters on the same balance when they were returned at each 4-month follow-up visit. The weight difference was divided by the number of days between canister issue and canister return to calculate the mean daily usage in grams.