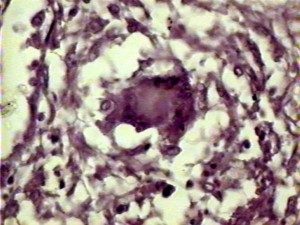 Asbestos is recognized as causing five forms of L nonneoplastic pleuropulmonary disease (pleural efiusion, hyaline pleural plaques, visceral pleural fibrosis, rounded atelectasis, and asbestosis), the pathogenesis of which is poorly understood. Whereas parietal pleural plaques and rounded atelectasis are characteristically localized lesions, asbestosis is often considered a diffuse disease, even though it may begin as localized peribronchiolar fibrosis. Asbestos is usually not thought of as producing localized parenchymal lung masses, although Hillerdal and Hem-mingsson described ten patients with localized visceral pleural fibrosis and fibrosis of the underlying lung parenchyma that caused a pseudotumor. More recently, Lynch et al identified 16 localized masses (9 intraparenchymal, 7 subpleural) in 260 asbestos-exposed individuals who were evaluated radiographi-cally.
The purpose of this article is to present the clinical and pathologic features of eight patients, occupationally exposed to asbestos, who developed localized pulmonary nodules or unusual pulmonary pathologic reactions. The localized disease processes were clinically thought to represent neoplasms and were resected for that reason. The data suggesting that these pathologic changes were caused by asbestos are discussed.
Materials and Methods
Patients
Demographic information, smoking history, occupational history, symptoms and signs, and radiographic findings of the eight patients are listed in Table 1. As shown, the patients were all male, with an age range between 61 and 74 years (average, 66.1 years). Six patients (cases 1,2,4,5,7, and 8) worked at the Puget Sound Naval Shipyard for many years, where they were occupationally exposed to asbestos. Case 3 was stated to have a heavy occupational history of exposure to asbestos while serving in the Navy. All patients, except case 6, were moderate to heavy cigarette smokers. Case 1 quit smoking cigarettes ten years prior to the identification of his right upper lobe mass. Case 3 stopped smoking cigarettes 15 years previously, but continued to smoke a pipe, and case 4 ceased smoking in 1972. Case 7 had been diagnosed as having rheumatoid arthritis, although he had a negative rheumatoid factor and antinuclear antibody. He had been treated with aspirin, parenteral gold sodium thiomalate, penicillamine, and prednisone.