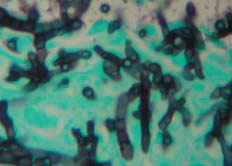 In cases 3, 7, and 8, there was radiographic evidence of bilateral interstitial disease, in addition to new bilateral nodular densities in case 3, and a “new” patchy infiltrate in the left lower lobe in case 7. Hyaline pleural plaques characteristic of those caused by asbestos were observed radiographically in cases 3, 4, and 8.
The pathologic and mineralogic findings in the eight cases are listed in Table 2. In cases 1, 2, and 3, there was intraluminal fibrosis and inflammation of distal air spaces (IFDA), a pattern of change frequently referred to as “bronchiolitis obliterans organizing pneumonitis” (BOOP) (Fig 1). Ferruginous bodies with cores characteristic of asbestos bodies were easily identified in the tissue, although in case 1, it was sometimes difficult to tell if some ferruginous bodies were asbestos bodies because their cores could not be seen. In case 2, the IFDA was associated with marked pleural thickening, but did not show the macroscopic or histologic features of rounded atelectasis. In these cases, the asbestos bodies were most prevalent in the regions of IFDA. The subpleural nodule from case 4 had an unusual appearance, showing localized alveolar edema with an intense eosinophil inflammatory infiltrate admixed with a few histiocytes and other inflammatory cells with early organization of the alveolar exudate in a few areas (Fig 2). Asbestos bodies were easily identified in this tissue, and again were localized to the area of inflammation and fibrosis. 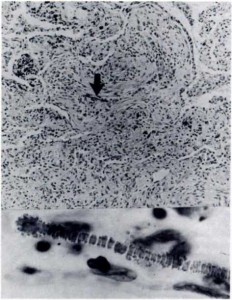 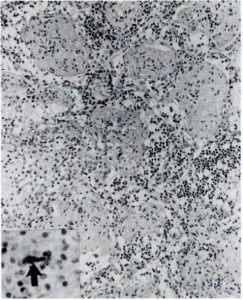 Figure 2. In some regions of the mass in case 4, there was “early” organization of the infiltrate with intra-alveolar fibroblast proliferation (hematoxylin and eosin, X 110). Ferruginous bodies consistent with asbestos bodies were observed admixed with the inflammatory exudate in the alveoli (insert, iron stain, hematoxylin and eosin, X330).