Sections of autopsy lung tissue in case 7 showed extensive granulomatous inflammation and fibrosis involving the peripheral lung tissue. The granulomata were not located in any specific distribution within the lung, and autopsy sections of regional lymph nodes and other tissue did not show granulomata. Numerous asbestos bodies were scattered throughout the region of granulomatous inflammation, and asbestos bodies were identified in the cytoplasm of many histiocytic giant cells, some of which were components of the granulomata (Fig 6). Cultures and special stains of lung tissue in case 7 were negative for microorganisms.
In case 8, the peripheral lung tissue macroscopically appeared relatively normal, although microscopically showed a diffuse lymphocyte-plasma cell interstitial inflammatory cell infiltrate (Fig 7) with a few widely scattered nonnecrotizing granulomata. The histologic changes were nonspecific, although they resembled those seen in extrinsic allergic alveolitis.

Discussion
In each case presented herein, one could question whether the described pathologic changes could have been caused by something other than asbestos. The answer is potentially yes, since the presence of asbestos bodies and fibers in lung tissue is only a marker of asbestos exposure, and does not necessarily imply causation. Infectious agents, other mineral dusts, and cigarette smoke may have contributed to some of the observed abnormalities. However, based on experimental animal studies, anecdotal clinical reports, clin-icopathologic studies, and studies showing that asbestos can initiate a variety of cellular fibroinflammatory processes, we believe that asbestos may have been the primary agent that caused the observed pathologic abnormalities. 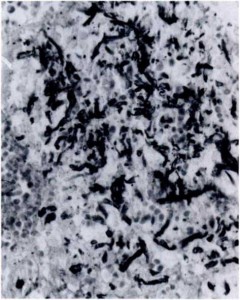 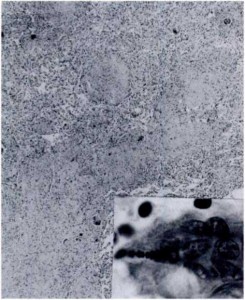