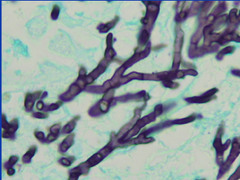 In his description of the pathologic features of asbestosis, Spencer states the following: “Accompanying these changes there is an outpouring of inflammatory oedema fluid accompanied by a histiocytic and giant-cell formation in the walls of the terminal and respiratory bronchioles. Later reticulin and collagen fibers are laid down in increasing numbers in the interstitium of the alveolar walls and many of the alveoli, alveolar ducts and respiratory bronchioles become obliterated by fibrosis, but the elastic framework still remains.” The photograph of asbestosis shown by Spencer displays an organizing pneumonitis characterized by extensive intraluminal fibrosis of the distal airways. In addition, Roggli reported observing several cases of organizing pneumonia in patients with asbestos exposure who underwent thoracotomy for suspected malignancy.
In one rat model of asbestosis, fibrosis was described in the lumen of the small distal airways, producing bronchiolitis obliterans, similar to the changes observed in cases 1, 2 and 3, reported herein. In this rat model, UICC Canadian chrysotile В asbestos was injected intratracheally. Alveolar and interstitial edema was observed 1, 3, and 6 months after treatment, and bronchiolitis obliterans was found in 33 to 45 percent of bronchioles (see their Fig 6).