Transient bilateral densities associated with proximal bronchiectasis and mucoid impaction of bronchi are the roentgenographic hallmarks of allergic bronchopulmonary aspergillosis.’ This report illustrates the fact that recurrent bilateral perihilar densities due to mucoid impaction may occur in a patient with asthma in the absence of either bronchiectasis or hypersensitivity to Aspergillus species. Recognition of this entity and its response to appropriate therapy eliminates the need for invasive diagnostic procedures, including bronchography and bronchoscopy.
Case Report
A 40-year-old woman was admitted to the hospital for evaluation of cough and fever associated with bilateral lung masses on chest roentgenogram. Two weeks prior to hospital admission she noted rhinorrhea, wheezing, and cough productive of small amounts of white sputum. Pleuritic chest pain, fever, and headache began two days prior to admission. She had a 25 pack-year smoking history and had worked only briefly. Gastric bypass surgery for obesity had been performed 15 years prior with reanastomosis later performed because of small bowel necrosis and infection. She continued to have intermittent symptoms of reflux esophagitis but without symptoms of aspiration. Two years prior, she was hospitalized for wheezing and bilateral perihilar densities on chest roentgenograms (Fig 1a). This illness responded to therapy with theophylline and penicillin (Fig 1b), and since that time, she has intermittently used theophylline. 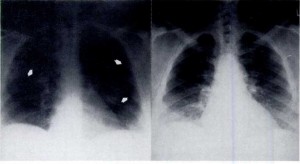 Figuras 1a (left) and 1b (right). Postero-anterior chest roentgenography reveals bilateral perihilar densities (arrows) at the time of a previous hospital admission (1a). These resolved after four days of bronchodilator therapy (1b)