She was obese and in moderate respiratory distress with a temperature of 38°C and absence of a paradoxic pulse. Percussion over the nasal sinuses did not reveal tenderness. The nasal mucosa was edematous. Tactile fremitus of the chest was normal with diffuse wheezing heard on auscultation. Egophony was not present. A chest roentgenogram showed bilateral, well-circumscribed perihilar densities (Fig 2a) as well as a left upper lobe nodule. Examination of sputum revealed mostly epithelial cells, and special stains and cultures for fungi and mycobacteria were negative. Her white blood cell count was 8,500 cells/cu mm with 50 percent neutrophils, 40 percent lymphocytes, and 10 percent monocytes. Peripheral blood eosinophilia was not present and the serum IgE was 178 IU/ml with a negative serum precipitin titer for Aspergillus species. Breathing room air, arterial blood pH was 7.50, PaC02 was 28 mm Hg, and Pa()2 was 59 nun llg. Sputum cytologic study was negative for malignant cells.
The patient improved following initial treatment with oxygen, inhaled (J-adrenergic agonists, intravenous aminophylline, and penicillin. 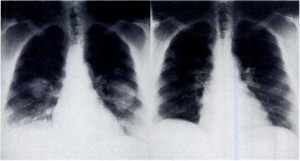