Predictors of longitudinal changes in pulmonary function: SUBJECTS AND METHODS (6) 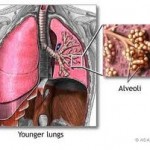 Lung function measurements: Lung function measurements were performed using an SMI spirometrics volume dispslacement spirometer (Sensormedics Inc, California) for both baseline across-shift and follow-up evaluations. Techniques followed the standards set by the American Thoracic Society . During the 1989/90 period, lung function was measured on-site in the barn before entering the work environment, every 2 h during the work shift, and at the end of the work shift. The difference between the first measurement of the day and the last measurement of the day was cosidered the across-shift change.

During the follow-up in 1994/95, lung function measurement was conducted at a time during the work day at the subject’s home or at a clinic location near the swine confinement facility. Lung function indexes measured during both shift change and follow-up were FEV1, FVC, FEV1/FVCx100, and maximal midexpiratory flow rate (FEF25-75). Predicted values were obtained using the regression equation of Crapo et al.