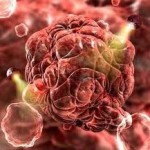 This case report and three others reported in the literature support the association of fludarabine therapy and acute pulmonary toxicity. The presenting symptoms of chemotherapy-induced pulmonary toxicity caused by different offending agents are fairly constant and include fever, nonproductive cough and dyspnea. Fever is a prominent finding; it may predate or antedate the pulmonary manifestations, but is almost universally present and is rarely associated with chills or rigors. The level of dyspnea and hypoxemia depend highly on the level of induced toxicity .

The clinical signs and symptoms of this patient were similar to those described in other reports of fludarabine toxicity. Radiographic findings in fludarabine toxicity consist of interstitial pulmonary disease occasionally progressing to airspace disease, as occurred in this patient. Pleural effusions have been noted in two patients . Several nonspecific pathological changes have been described, including hypersensitivity pneumonitis (eosinophilic pneumonia), interstitial pneumonitis and diffuse alveolar damage, as this patient had.