Echocardiogram showed a dilated aortic root with a dimension of 5.0 cm and dilatation of the left ventricle with an end-systolic dimension of 6.5 cm. Diastolic flutter of the mitral valve consistent with aortic regurgitation was noted. The aortogram (Fig 1) revealed annuloaortic ectasia and severe aortic regurgitation with normal aortic cusps. There was marked dilatation of the ascending aorta with diffuse, severe dilatation of the aortic arch and descending aorta. There was no evidence of great vessel obstruction. The ascending aorta and aortic valve were replaced in March 1983 with a composite graft containing a No. 29 Bjork-Shiley valve. The pathologic examination of the aorta (Fig 2) showed marked intimal thickening with fibrous and atheromatous involvement. There were focal clusters of giant cells with collections of chronic inflammatory cells. Disruption of the elastic lamina was demonstrated as well. These changes are consistent with giant cell aortitis.
Case 2
In 1979, a 67-year-old woman had the chief complaint of severe intermittent headache with nontender temporal arteries. Erythrocyte sedimentation rate was normal. Temporal artery biopsy specimen confirmed the diagnosis of temporal arteritis. The patient was treated with prednisone, 40 mg/day, in variable doses over a subsequent 18-month period of time. No cardiac murmur was present and a chest roentgenogram was normal. 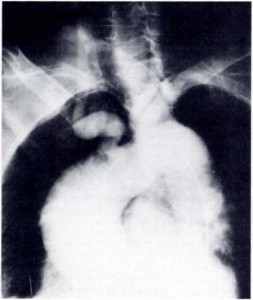