Silicone Stents in the Management of Inoperable Tracheobronchial Stenoses 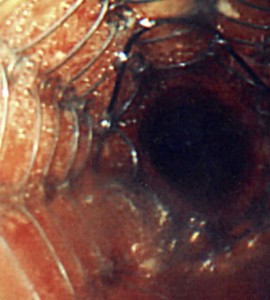 Various treatment modalities have been developed for the management of inoperable malignant stenoses of the central airways. The Nd:YAG laser has become the most widely used method to relieve obstructions caused by intraluminal tumor growth. Airway narrowing caused by predominantly extrinsic compression or unstable bronchial walls due to destruction of the cartilaginous support is not amenable to laser therapy and must be treated with mechanical dilatation and/or stent placement to maintain airway patency. The different stent types currently available have been developed from metal and silicone models.
Most metal stents (Gianturco, Wallstent) were originally designed for intravascular use and are meant for permanent placement, but various reports about tracheobronchial applications have been published. The silicone stents originally designed as T tubes have been used in modified forms by many investigators. Today the most widely used stent type is a removable silicone endoprosthesis (Endoxane) designed by Dumon. We evaluated all Dumon stents that have been inserted at our institution since September 1990. The aim of the current study was twofold. We first tested the technical aspects of these stents (ease of insertion and retrieval where necessary), their efficacy, and tolerance; in a second part, we were interested in the long-term results in terms of airway patency over time. As little is known about local tumor progression after stent insertion, we compared patients who underwent adjuvant radiotherapy after stent placement with a group that was observed only.