Nine patients were transferred to the unit from another hospital (7 percent). Nineteen patients were admitted directly to the NRCU—either from home (4 percent) or through the emergency room (11 percent). Forty-five NRCU patients (33 percent) were ultimately discharged home, four patients on mechanical ventilators. Seventy-two patients admitted to the NRCU (53 percent) died during hospitalization (Fig 3).
Cost Analysis
Using the 1988 case mix of 136 NRCU patients, hospital costs exceeded payments by a total of $1,519,477. Profit/loss performance varied according to primary payor source. Losses were consistently demonstrated when Medicare or Medicaid were primary payors and were highest for patients who received mechanical ventilation. Costs for ventilated patients exceeded payments by an average of $744 per day for Medicaid patients and $727 per day for Medicare patients.
To analyze the financial impact of the NRCU, we compared daily cost data from 53 patients who received mechanical ventilation in both the MICU and the NRCU. Table 1 summarizes our findings. The average cost per day of care in the MICU was $3,164, whereas the cost per day of care in the NRCU was $1,188, a difference of $1,976 per day. 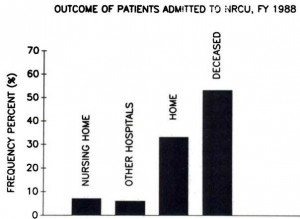