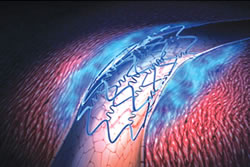 Thrombosis has been recognized as an important component of vascular response to coronary angioplasty, since it underlies acute complications and can contribute to late restenosis. Recognition of intracoronary thrombi may have significant consequences in patient management. The accuracy of arteriography for demonstration of intracoronary thrombi after angioplasty is unclear. Early studies indicated a high sensitivity for arteriography in demonstration of occlusive thrombosis in acute myocardial infarction. However, later reports showed little sensitivity for this method in detection of nonocclusive thrombi in unstable angina, as compared with angios-copy. The specificity of arteriography is also not defined. After angioplasty, the discrepancy between the high incidence of thrombosis in experimental models and the observed low clinical incidence of arteriographic thrombosis suggests poor sensitivity of arteriography. Initial angioscopic and intravascular ultrasound studies in man are also consistent with this idea. However, the extent of arteriographic inaccuracy, as well as possible factors influencing thrombus demonstration, are unknown.
In order to gain insight into these questions, we analyzed the relationship between coronary arteriographic abnormalities immediately before death and the histologic extent of mural thrombosis in dogs submitted to balloon dilation of intact coronary arteries.
Methods
The animals described in this study were in part used in previously described protocols. Briefly 77 mongrel dogs of both sexes, weighing 17 ±6 (SD) kg, were anesthetized with pentobarbital, intubated, and artificially ventilated. Systemic arterial pressure and lead 2 of the ECG were continuously monitored. Intravenous 0.9 percent NaCl solution was given at a rate of 15 to 20 ml/ kg/h. Heparin was given to 67 dogs as an intravenous bolus 30 to 50 min before angioplasty; the bolus doses were 100 IU/kg in 55 dogs and 50 IU/kg in 12 dogs. Ten dogs received no heparin. This study was performed according to the guidelines for animal care of the American Physiological Society and approved by a local committee.