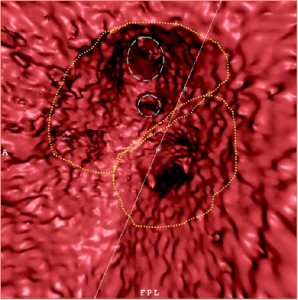 Before each injection, a system test was carried out in order to adjust the kilovolt (peak) for 100 percent quality; the intensity of current was automatically adjusted. Images were recorded with 50±3 (SD) kVp and 112±2 (SD) mA. Focal spot size was 0.6 mm; dose, 18 jiR per frame; image intensifier field size, 6 indies; spatial resolution, 64 line pairs/cm; brightness conversion factor, 103 candelas-sq m~KmR. The actual magnification, evaluated from the size of the intracoronary catheter tip in all dogs, was 2.3 ±0.1 (SD) times.
Analysis of Arteriography
Films were coded in order to allow a blind analysis. Arterial diameters and percentage of balloon-induced dilatation were drawn from projected arteriographic images and measured with a computer-assisted digitizing table. On a separate occasion, the arteriograms were evaluated for images suggestive of intracoronary thrombosis at or within 1.0 cm from the region injured by the balloon. The following findings were systematically analyzed by two independent observers (Fig 1): (1) minor localized intraluminal filling defects, considered as those not clearly distinct from the adjacent vascular contours; (2) discrete intraluminal filling defects, defined as those clearly dissociated from the adjacent vascular contours, with spherical or irregular shape; (3) staining of thrombus through contrast material retention; (4) interrupted or slowed flow, assumed when three or more cardiac cycles were required to opacify the entire distal LAD. The interobserver concordance for arteriographic classification was 98.7 percent (one minor discordance in 77 cases). 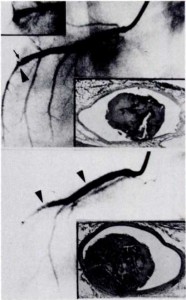