Statistical Analysis
Data are presented as mean±SEM, unless stated otherwise. Student s t test and one-way analysis of variance were used to assess differences among two and more than two means, respectively. The correlation between arteriographic positivity and thrombus size was assessed through logistic regression in all 77 dogs, with a program designed for IBM PC-compatible computers. In the 26 dogs with scanning electron microscopic analysis, a similar model was fitted with the variables thrombus size, fibrin composition, and angiographically slowed flow. Scanning electron microscopic specimens were systematically analyzed by two blinded observers for presence of platelets, red blood cells, and fibrin. Arbitrary scores of 1 to 4 were given to each of these findings; both the average and the maximal scores were considered for all sections of each dog. Thrombi with average or maximal scores of 3 to 4 were considered fibrin-rich; those with average or maximal scores of 1 to 2 were considered fibrin-poor (Fig 2).
Results
Mean arterial pressure was 115 ±4 mm Hg, and mean heart rate was 117 ±3 beats per minute. These variables remained within a maximal 10 percent variation throughout the procedure in all cases. Vasospasm at the distal or proximal tapered balloon extremity has been analyzed in detail elsewhere. There was no direct correlation between the severity of vasospasm and histologic thrombus size (r = 0.10, not significant). Balloon insufflation induced a 53 ± 6 percent increase in baseline arterial diameter. 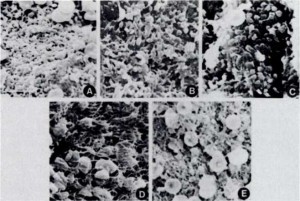 Figure 2. Scanning electron microscopic images from five dogs after angioplasty, showing thrombosis superimposed on areas of endothelial and subintimal damage. Bar represents 10 jim (original magnification, X 1,000). Panels A, B, and C: Predominance of platelets and a few scattered red blood cells. Fibrin deposition was not pronounced. These thrombi were read as fibrin-poor. Panels D and E: Predominance of fibrin lattice, trapping platelets and red blood cells. These thrombi were read as fibrin-rich.