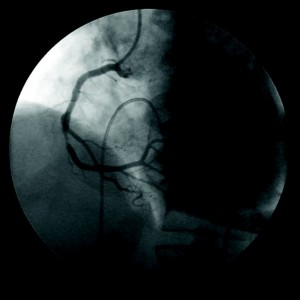 Accuracy of Arteriography
The overall sensitivity of arteriography for detection of mural thrombi was 34 percent (17 of 50 dogs were AT+). The specificity was 100 percent (none of the 27 AT + dogs was without histologic thrombosis). Figure 3 depicts the histologic extent of mural thrombosis in AT — and AT + dogs. The lower limit of the 95 percent interval for thrombus size distribution in AT + dogs was 21.8 percent of the arterial lumen area. Arteriography consistently missed thrombi smaller than 25 percent of the arterial lumen area (22 of 23 dogs were AT—); this value was chosen from a preliminary cohort before this study. Even considering as significant only thrombi larger than this value, 11 of 27 mural thrombi were still missed by arteriography (sensitivity, 59 percent; specificity, 98 percent); this occurred despite thrombus sizes ranging between 27 percent and 75 percent of arterial lumen area.
Factors Influencing Thrombus Demonstration at Arteriography
The factors potentially influencing thrombus demonstration that were analyzed in this study were arterial lumen calibers before and after angioplasty, histologic extent of injury, histologic thrombus size, presence or absence of slowed flow, and thrombus composition at scanning electron microscopy.
Baseline coronary diameters were 2.1 ±0.2 mm in AT— dogs without mural thrombosis, 2.0±0.1 mm in AT— dogs with mural thrombosis, and 2.1 ±0.1 mm in AT 4- dogs (p = 0.62, not significant). The percentages of balloon-induced dilation were equally similar among these three groups, with increases in baseline diameters of 58 ± 9 percent, 52 ±5 percent, and 51 ±8 percent, respectively (p = 0.76). The histologic injury scores averaged 2.9 ±0.2 and did not differ among these groups (p = 0.60). 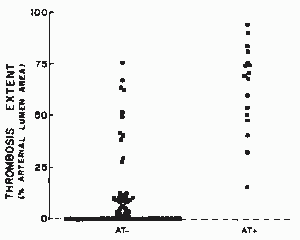 Figure 3. Histologic extent of thrombosis in dogs without (AT—) and with (AT+) arteriographic evidence of intracoronary thrombosis after angioplasty.