Transcarinal Aspiration of a Mediastinal Cyst to Facilitate Anesthetic Management (1) 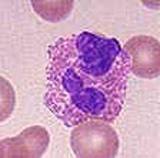 Perioperative treatment of patients with mediastinal masses is not infrequently complicated by major airway obstruction. These most commonly involve solid tumors, occur in patients who are asymptomatic preoperatively, and develop during induction of anesthesia. Airway obstruction can be severe and even fatal. We describe a case of severe major airway obstruction during anesthesia caused by a large mediastinal cyst. Intraoperative endoscopic deflation of the cyst allowed for safe delivery of anesthesia and subsequent surgical resection.
Case Report
A 35-year-old woman was found to have a 4.5-cm mass in the subcarinal area. She had smoked 1 V2 packs of cigarettes per day for two years and had a morning cough productive of small amounts of sputum. Recently she had noted wheezing, a symptom she had not had since childhood when she had asthma. She had no dysphagia. Physical examination revealed an obese woman in no distress. She was referred to our institution for surgical resection of the mass.
Chest roentgenogram (Fig 1) performed at our institution revealed a 6-cm subcarinal mass that pushed the bronchus intermedius laterally and narrowed it. The mass had enlarged since a chest x-ray film taken two weeks previously. X-ray films of the esophagus revealed extrinsic compression in the midesophagus. A preoperative expiratory flow-volume curve did not suggest major airway obstruction. Surgical resection via right thoracotomy was advised. 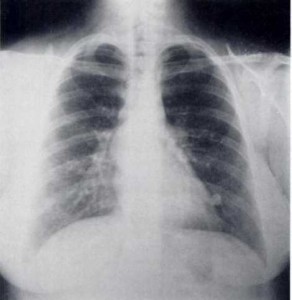