Transcarinal Aspiration of a Mediastinal Cyst to Facilitate Anesthetic Management (2)

General anesthesia was induced with the patient in the supine position. She was intubated with a 7.5 mm ID endoctrachial tube with some difficulty due to a very anterior larynx. Difficulty in ventilating was noted immediately with peak inspiratory pressures of up to 35 cm H20. Endotracheal tube placement was confirmed by mass spectrometry and auscultation revealed decreased breath sounds on the left. Withdrawal of the endotracheal tube did not improve the breath sounds over the left hemithorax. Arterial blood gas determinations revealed a large alveolai^arterial gradient (Pa02, 111 mm Hg; PaC02, 43 mm Hg; pH, 7.30; with an Flo2 of 1.0. 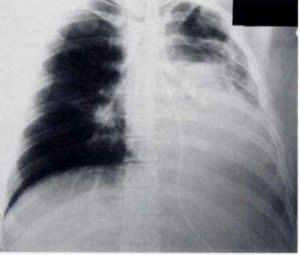